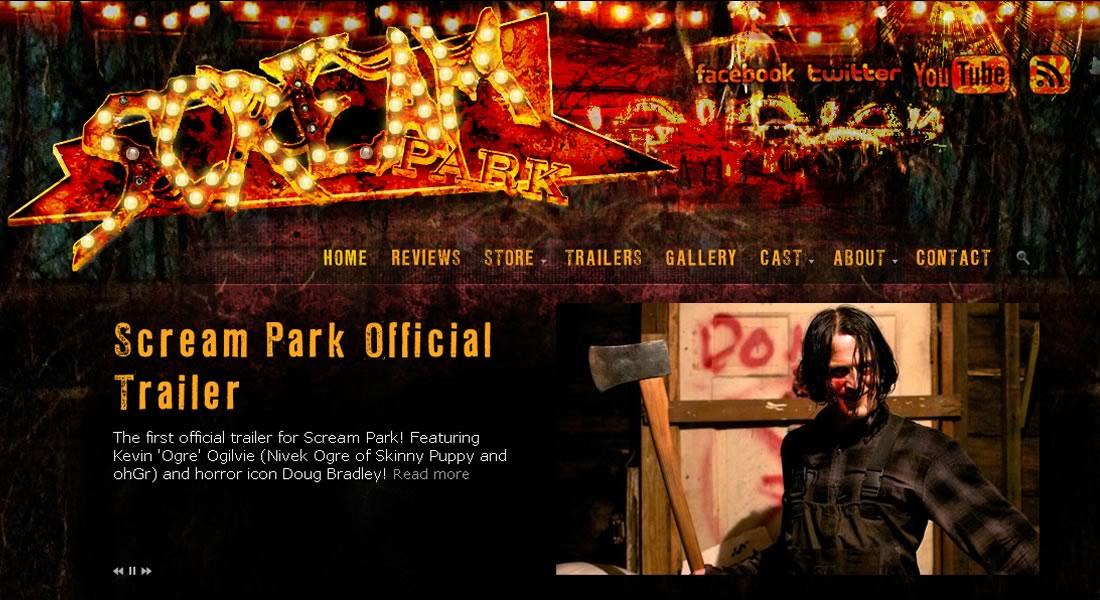 We were approached by Arvin Clay (makeup effects) and Cary Hill (writer/director) to help them update their horror movie website. What really excited us was discovering that Kevin ‘Ogre’ Ogilvie (Nivek Ogre of Skinny Puppy) and horror legend Doug Bradley were going to be involved with the film. NO WAY could we pass this up!

In late Spring, early Summer of 2011, the clients had set up an IndieGoGo campaign for the project, but had no web presence, social media or internet marketing efforts to help them, leaving us to start from scratch with campaign deadlines looming.

We worked with them to understand brand management and determine the social profiles they’d likely have the best results with and which would be easiest to maintain. We also discussed how they wanted to market the movie by combining online and offline opportunities.

From strategic internet marketing and outreach, social media driven contests to building networks of bloggers and supporters who could help them spread the word, we covered it all. We also covered crowdsourcing tactics and helped them understand advanced strategies for maintaining strong IndieGoGo and Kickstarter campaigns.

We then brainstormed a fast turnaround WordPress-based website design that would not only breathe new life into their web presence but would also allow easy updates as their marketing efforts evolved.

We also helped them improve their Facebook and Twitter profiles with new graphics and social media consultation. New mini-movie posters were designed and new logos developed, with plans for ongoing merch design opportunities.

We were able to turn this project around in a month, given their tight production and IndieGoGo deadline. Unfortunately, the movie’s production had to be put on hold over winter 2011 and then fired up again in Spring 2012.

This time around, due to continued outreach and my online marketing support, an incredible network of online and offline fans, and a supportive and talented cast and crew, Scream Park’s subsequent Kickstarter campaign finished up $5000+ over their initial goal!

We worked tirelessly to turn out amazing graphics and a design that had the clients exclaiming:

“The website looks phenomenal. That doesn’t even fully describe it…All the hard work is mightily appreciated. I get exceptionally floored by the Games & Prizes section. It looks really–wow. Can’t say enough good stuff.”

“You and your team have done an amazing job for this project. I feel like we are in the right direction to REALLY get going now. I look forward to all of the amazing months ahead! Thank you!”

“I hired Brea and her team to create the website and logos for my annual film festival–the Horrible Imaginings Film Festival in San Diego.

From the initial consultation to the day when I was able to go live with my new fully-functional website, Brea’s work was the very definition of exemplary.

She is very good at taking the vision of her clients and translating them into a website that is thematically appropriate, easy to use, clean, and engaging.

Her explanations of SEO and some of the more technical aspects of web visibility are concise, easy to understand, and non-threatening for those of us who are flummoxed by the jargon.

Her pricing is the most reasonable I’ve seen, especially considering the level of quality she delivers. I can’t recommend Brea enough!”

“Brea has a rare combination of discipline and creativity. Her background in web design means she knows about the back end of a site, and what it takes to rank well. She is my go-to person for questions about SEO – from code to link building.

Along with the impressive technical knowledge, her writing ability is stellar. My favorite aspect of Brea is her energetic and motivating personality. She captivates her clients with her SEO knowledge, and the results show in traffic and rankings.”